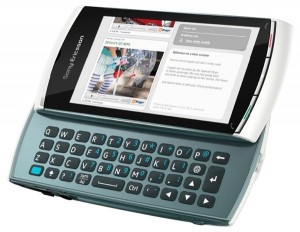 If the only thing holding you back from owning Sony Ericsson’s HD recording Vivaz is your fear of virtual keyboards – have a look-see at the new Sony Ericsson Vivaz Pro!

The QWERTY board adds a tiny 2.5mm to the Vivaz’s slimline â€˜human curvatureâ€™ contours, but you do seem to lose some features.

Instead of an 8.1 MP snapper of the Vivaz, the Vivaz Pro gets a shaved down 5.1 number. You still, however keep the lovely 720p HD video recording and a 3.2-inch screen which is a relief! 🙂

Wi-Fi, GPS and the 3.5mm headphone jack are as should be as is the microSD card slot.

Sony Ericsson Vivazâ„¢ pro will be available in selected markets from Q2 in the colours Black and White.

I’m hoping to get a grope of this tomorrow.