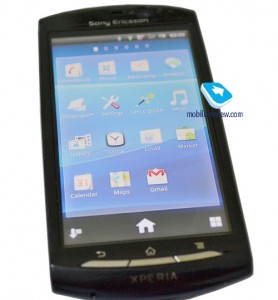 Sony Ericsson is getting ready to squirt out their follow up to the Symbian touting Vivaz.

Vivaz 2, aka MT15i and Halon, has not yet been made official but that hasn’t stopped Mobile-review getting their grubby little paws on one and give it a thorough going over.

First thing first – Vivaz says “toodle-pip” to Symbian and “how you doin’?” to Google’s Android OS.

The Vivaz 2 seems to have a larger, sharper screen (especially along side shots of the Galaxy S) and, just like the Xperia Arc, is emblazoned with Sony’s Bravia TV branding.

Its HD Video capabilities seems to be a major deal and so, obviously, it sports an HDMI port so you can hook it up to your big screen telly.

As soon as you hear the words “big, bright screen” your first thoughts may be towards battery longevity. Well, apparently the Vivaz 2’s battery is “quite a performer” compared to other Android smart phones. The pre-production test model was running Android OS: 2.3 Gingerbread by-the-way.

The Vivaz 2 is equipped with an 8-megapixel camera, 300MB of storage and a more powerful processor. It doesn’t sound like the new SE phone will be joining the march of the Dual-Core though.

It does sound like the switch over from Symbian to Android has made the Vivaz more slick in operation but looking at the specs there seems to be quite a bit of cross-over tween this and the Arc. Both are rocking HDMI output and 8-megapixel cameras for instance – but I suppose that’s a job for Sony Ericsson’s marketing department 😉