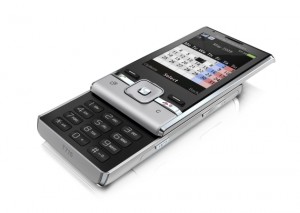 The T715 by SE is here to appease those that aren’t digging touchscreens.

Yeah, I actually know a couple of people that hold no truck with no virtual board – they’re all about the buttons. Real, clickable, physical keys.

These same people would also love to avoid signing a contract that pledges them, their children and their grandchildren to the allegiance to a single company.

Ok – so the Satio is pretty funky but I’m here to talk about the new SE slider – the T715.

It looks a typically stylish addition to the fleet of sliders and no doubt will share the quality of feel along with the W995 Walkman.

If you’re fed up with straining your eyes trying to read clever fonts and have more masculine fingers you’ll appreciate the larger keypad and font size.

You’ll get a 3.2 megapixel camera with an LED photo light for those shots taken in the chill-out zone of your favourite club – you could also use the in-built GPS to geotag those shots to remind the victims of your ad-hoc shooting where they were. The T715 shuns the Sony Memory Stick slot and welcomes the much more swapable MicroSD which is a very positive move 🙂

Expect it to arrive in the third quarter of this year for a middle-of-the-road price.