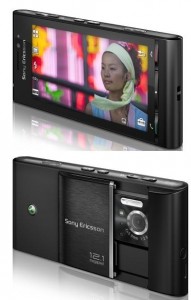 If you have the 12mp camera equipped SE handset and things seem to be a tad odd or, hopefully, yours is working just tickety-boo you should read on.

The Satio has now been removed from the shelves of both CPW and Phones4U.

Word is that the problems stem from a â€œsoftware faultâ€ so perhaps it’s not playing nice with the version of Symbian S60 that the Satio runs.

In a statement to Electric Pig Sony Ericsson said, â€œSony Ericsson confirms that it has been made aware that a small number of consumers have experienced software issues with its Satio handset when using certain applications. Carphone Warehouse and Phones 4u have temporarily removed the handset from sale to ensure that future customers do not have an adverse experience. Sony Ericsson is giving this matter its utmost priority and is working toward solving it as soon as possible. â€ It did not issue any details on whatâ€™s actually wrong with the cell.

Vodafone said that â€œThe version of the Sony Ericsson Satio that we range includes Vodafone software that weâ€™ve tested specifically. The version that CPW has is different to the version that we sell our customers directly. With any device that goes out to market we experience a proportion of returns, but the returns weâ€™ve seen on the Vodafone version of the Satio are not at the point where we would recall the device.

Orange says it shall continue selling the Satio as â€œIts own unique software build on the Orange branded variant, which is optimised for our network and which went through a significant period of testing prior to launch.â€ However, Orange also says itâ€™s keeping a close eye on the situation.

Basically if your top-end SE blower has stopped working sprint it over to whence it came.

Carphone Warehouse said that if yours isn’t working you should take it over straight away and they’ll offer any customer who returns a faulty Satio an alternative phone.

So – you had any problems with yours?