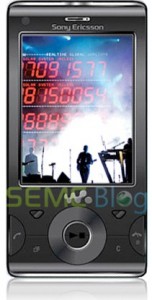 There were rumours of the Sony Ericsson Hikaru Walkman phone back in October.

The pics that were floating aroung the internetblogosphere weren’t convincing enough and the details were too vague to bother you lovely people with at the time.

But now there’s been a development.

There’sÂ now a real looking pic of the Hikaru which has appeared/been leaked on SEMCblog.

Not a render and not courtesy of Mr/Miss/Ms/Mrs blurry cam!

The design is nice and quite safe I think.

It looks like an inevitable evolutionary step in the SE slider style Walkman phones.

This latest pic comes with some sketchy specs:

But all of this needs to be taken as a guesstimate until actual, really-real specs are released.

I think that Sony Ericsson can be expected to unleash the Hikaru, probably under its real name, at the MWC 2009 next week.