Sony Ericsson Elm – Hands on With the Green Machine 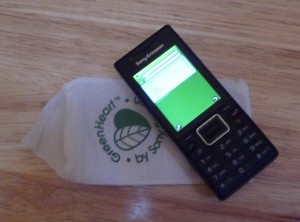 Fresh from being named the most sustainable handset on the market last month – I bring you the SE Elm.

Sony Ericsson’s Elm was given 4.3 out of 5 for its green cred by the UKâ€™s first sustainable rating system for mobile phones, O2â€™s Eco rating.

Not bad as it was amongst 65 mobile phones, from six manufacturers – it managed to get this award because the Elm uses recycled plastic, has no hazardous chemicals, uses a power charger that consmues less power, and uses much less packaging.

First off, if you’ve ever used a Sony Ericsson phone before you’ll feel at home with it straight away.

The design of the Elm follows Sony Ericssonâ€™s new human shape design, first seen in the Vivaz and the Xperia X10 -Â Flat on the front with a lovely curve to it at the back, the Elm actually looks great and is really comfortable to use – it’s also quite a bit cheaper than those other phones just mentioned 😉

The Elm is equipped with a 5 megapixel camera that will take video at 30 fps. Audio comes by way of its Walkman-based MP3 player. Sound quality is pretty decent and phone calls are nice and clear. If you’re looking for some mood music – Sony Ericssonâ€™s SensMe app automatically generates playlists from your tunes according to the mood you want.

Gawp at YouTube vids by hooking your Elm up to the web via 7.2Mbps HSDPA and WiFi connections and then get social with the Elmâ€™s built-in MySpace, Facebook and Twitter apps.

The Elm comes with GPS, Google Maps, and a full Sat-Nav application thanks to WisePilot, which provides turn by turn voice-guided navigation to help you find all those points of natural beauty for hugging trees and tickling bees, etc.

It wouldn’t be a true Eco-warrior phone if it didn’t also have a way of measuring your carbon footprint; thankfully the Elm also has a built in Green Calculator.

The Elm is pretty straight forward to use and will suit people that aren’t bothered about having a super-smartphone with a touchscreen. I’d place the Elm in as a mid-range phone.

You can still hop on the web and it has some built in apps but you aren’t able to download any others. Saying that, the buttons are good and the phone is nicely responsive and easy to navigate.

To me the plastic used for the phone’s body feels a little thin and, even though its only had light use for testing, some of the paint is already scratched – perhaps best to keep it in the little pouch it comes with.

What may sway you, if the Elm’s green credentials and usability isn’t enough is the price. You can get it for free on O2’s Â£15 per month contract, and Carphone Warehouse has it starting at just a tenner a month!

How remarkable is the price? Currently you can buy the Sony Ericsson Elm for free from just Â£15 a month, or you can buy it for slightly more with every free gift you can think of!

So if youâ€™re green, or if youâ€™re looking for a phone with decent features at a bargain price you could do a lot worse than buying the Sony Ericsson Elm.