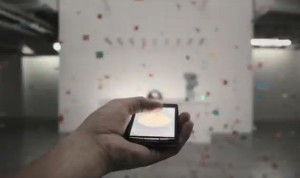 Sony seems to be starting fresh in 2012. Not only has is axed Ericsson from its phone line but now they want to control everything using a dot.

The new Sony teaser video promises a form of “new entertainment” in the shape of ‘Dot Switch’.

What the heck is Dot Switch, apart from being some new entertainment thingy? I hear you ponder.

The video only teases (it is a teaser after all – that’s what they do) at its myriad uses.

What appears to be a Sony Xperia is being used to turn on a gramophone, a TV, set-off confetti cannons and turn on some lights in order to reveal a robotic arm. This arm lifts a silver cover to show, for a second, a small black box which displays the same circular interface as the phone.

Now, unless Sony are going to bring back the gramophone or go in to a high-tech line of confetti cannons, I’m taking it that these elements are meant to be a hint to the uses of that black box.

By that I mean controlling your AV system, you know, fun stuff all via your Sony mobile phone. Perhaps even sharing content between devices.

It could be a media hub that will link all your Sony kit with your Sony Xperia S.

We will know when the answer is revealed on February 21.