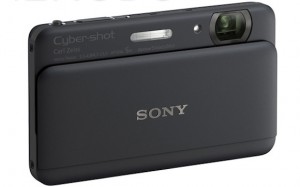 Want to take a camera with you on a night out but don’t want it to ruin the cut of your jacket, add a bulge in your jeans or take up valuable make-up room in your clutch bag? Sony may have answered your prayers with their super-slim CyberShot TX55.

The Sony CyberShot TX55 will be the thinnest compact camera around when it makes its on-shelf appearance later this summer.

The TX55’s imaging prowess comes thanks to its 16.2MP Exmor sensor – as well as taking snaps and HD movies this wafer-thin camera is packing Intelligent Sweep Panorama cleverness – this enables you to grab auto-stitched panoramas of up to 42.9MP. The CyberShot TX55 can also capture 3D photos and video clips if you’re into that kind of thing. All of this stuff is stored on either a Sony 16GB Memory Stick or 8GB SD and then can be played back and viewed on the cameras 3.3in OLED touchscreen.

The Sony CyberShot TX55 records 1080i AVCHD video at 60fps in video mode and there’s a 10fps burst mode for still images. You get a variety of built-in filters and effects including HDR painting, tilt-shift and toy camera modes along with colour and monochrome filters.

Even though the TX55 is equipped with a 5x optical zoom Sony says that this can be doubled to 10x by the Pixel Super Resolution function. Apparently this will boost magnification without reducing pixel count. I reckon I’d need a test-drive to get my head around that claim.

There’s no word yet about the UK pricing and release for the Sony CyberShot TX55  but the states will get this pocket camera in September at a cost of $350.