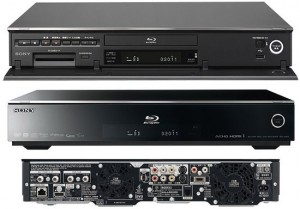 Sony has announced that they’re releasing a couple of Blu-ray Disc recorders.

Well, as well asÂ recording your fave tele shows they’ll also haveÂ the power toÂ export the video to portable devices such as the PSP or Walkman.

It’ll even go onto your phone!

AlthoughÂ that will be restricted to â€œanalogue broadcast program or other video that does not contain any copy protection signal.â€

Sony have managed to put together a lot of current tech such as streaming and downloadable video, Blu-ray recorders, etcÂ and byÂ addingÂ the ability to port that content over to your handy gadget they’ve added a feature that has eluded almost every set-top box so far.

Unfortunately, I have a feeling that this is destined to stay in the land of the rising sun.