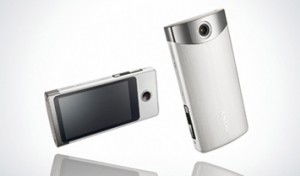 You may already be fairly familiar with the Sony Bloggie Touch – The sleek Full HD pocket Internet camcorder that has a trick up its sleeve â€“ 360-degree recording.

The original Bloggie arrived at the beginning of 2010, and there was a Webbie a year before that. Sony did step up their game when designing the Touch though.

As it’s called Touch you’ve probably already worked out that, apart from the power button and a physical camera button, all the settings and functions are controlled using the Bloggie’s sharp 3-inch touchscreen TFT. This has a 288Kpixel resolution, which is quite reasonable by camcorder standards.

The heart of the Bloggie Touch is its 1/2.5in CMOS sensor with Exmor technology. It’ll grab shots at 12.8-megapixels when in 4:3 digital camera mode, capturing still images at a native resolution of up to 4,128 x 3,095. Video is filmed at 2.07-megapixels.

Its lens isn’t fantastic for photos but better than your average camera phone. The Bloggie Touch can record video at a Full HD resolution of 1,920 x 1,080 pixels. It also offers 720p, but not VGA.

Video is recorded in MP4 format, and thereâ€™s 8GB of flash memory built in. At the top Full HD quality setting, this is enough for around 85 minutes of footage. It’s just a shame there’s no slot for memory cards. 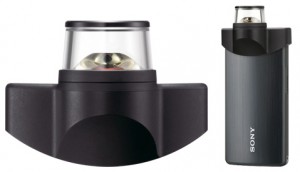 What seperates the Bloggie from other compact cams is its 360 shooting smarts. Double click on a 360-degree video and this loads into a special player. Here, you can pan round the panorama, so the frame is centred on the point of your choosing with the rest of the view either side in a strip. You can then choose to output a WMV, which converts the 360-degree shot to a strip with your chosen point at its centre.

The Bloggie has a mini-HDMI connection, but squirt your 360 film to your TV and all you’ll see is the strange disc, only bigger.

The Bloggie is for blogging, or rather social networking and has a pop-out USB 2.0 plug and the necessary software built in. The app included is just called Bloggie and can sling your photos to Facebook and Flickr, and videos to Facebook and YouTube.