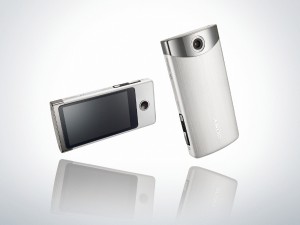 Sony has been busy at the IFA trade fair in Berlin and here’s a few things that they’ve been showing off.

First-off, the new-generation Bloggie Touch MHS-TS20K is a really sleek and stylish mobile HD snap camera. It comes with a 7.6cm (3â€) touch-screen and new interface, and the usual built-in USB and Social Networking friendly Bloggie software, which make it ideal for blogging-on-the-go.

It will snap 12.8 megapixel stills as well as recording 360-degree panoramic videos and photos to capture everything thatâ€™s happening around you â€“ just clip on the supplied lens adaptor. 360 Videos are now twice the resolution of previous-generation Bloggie, and low-light video quality is also improved thanks to the Exmor CMOS sensor. In addition to fun 360 Video, Bloggie Touch features â€œfree-style shootingâ€ which allows you to capture movie both in landscape and portrait.

The Bloggie Touch MHS-TS20K will be available from the beginning of November 2010.

Then there are the Handycam DCR-SX15E and DCR-SR15E Standard Definition camcorders. These come with a powerful 50x optical zoom, SteadyShot, Face Detection and video lights and are really light and easy to carry. 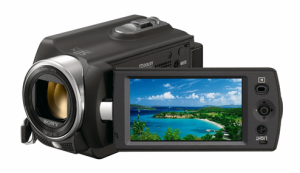 Light, compact and easy to use, the Handycam DCR-SX15E shoots crisp, clear video and stereo sound onto removable flash memory. Just slip in a Memory Stick or SD card and capture the moment for easy transfer to your PC after shooting.

If youâ€™re looking for extra-long record times, Handycam DCR-SR15E stores up to 61 hours of Standard Definition video on its 80GB built-in hard disk drive. With no need to carry spare tapes or discs, thereâ€™s plenty of space for a long weekend of non-stop shooting.

Menus and settings are adjusted via a thumb-operated joystick next to the flip-out 6.7cm (2.7â€) Clear Photo LCD. A conveniently-placed button switches on the built-in video light to illuminate indoor get-togethers, parties or night-time scenes. For extra convenience thereâ€™s also an Auto mode that switches the video light on when natural light levels are low.

The Handycam DCR-SX15E and DCR-SR15E will be available from the beginning of October 2010. 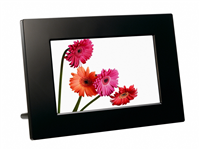 Finally thereâ€™s the latest S-Frame range of digital photo frames. There are ten in total and the XR100 and VR100 come with HD video playback â€“ a first for Sony â€“ enabling you to show your camcorder, camera, and DSLR AVCHD clips with clear, rich stereo sound.

The S-Frame range will also be available from October 2010.