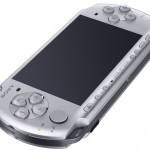 Sony has finally announced the birth of the PSP-3000 at the Leipzig Games Convention.

The unit itself will look exactly like the PSP-2000 although it has been kitted out with an “improved screen that’s better outside with no glare and a built-in mic”.