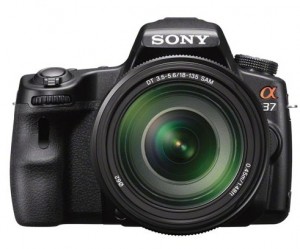 First we had compacts and DSLRs and then those lens-swappers known as micro four thirds joined the party. Now, Sony’s new entry-level SLT Alpha camera, the Sony A37, finds itself between the SLR and a Micro 4/3 snappers.

The Sony SLT-A37 is happy swapping lenses when needed and it will also grab HD video.

The A37 is the newest entry to Sony’s range of SLT cameras. You may already be familiar with SLR, or single lens reflex, but SLT stands for single lens translucent. The single lens bit still means that there’s a mirror in the camera which makes the viewfinder work like a periscope, so you can look in the eyepiece and see what the lens sees.

It’s equipped with a 16.1-megapixel APS CMOS sensor and shoots 7 frames per second which will be handy for snapping some Olympic action.

The SLT-A37’s LCD screen flips from the back so you can see what you’re doing when shooting above people’s heads, between their legs or around corners – whatever you need to do to get that shot. The display is a 2.7-inch job which has shrunk slightly from the previous model’s 3-inch screen.

You can shoot 1,920×1,080-pixel 50i high-definition video in AVCHD format which should look pretty neat through the high-resolution electronic viewfinder.

The usual toys are on-board but there’s also a clever little mode which automatically frames portraits by cropping pictures for you. Thanks Sony. Tony.

The A37 arrives at the end of this month, with prices yet to be confirmed