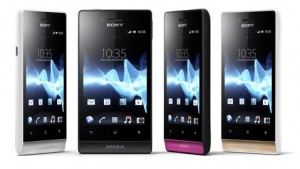 The Sony Xperia Miro and Tipo are both brand new Android 4.0 cash-conscious smartphones and will probably pop-up on Pay As You Go tariffs too!

Looking at the spec sheets for the Miro and Tipo there’s lots for those upgrading from feature phones but, other than a keen price-point, little to stir the passions of ardent smartphoners.

Saying that though, it does look like there’s some new and impressive integration with Facebook – dare I say that it could be on a par with Apple’s iOS 6? I think I just have 😉

Also both Xperias are loaded with Google Android Ice Cream Sandwich right out of the box – which is good news indeed.

The Miro is a basic 3.5-inch touchscreen phone that comes packing a five megapixel camera, and many of the same design cues as its bigger brothers, the Xperia P and Xperia U.

What has grabbed my intetrest is the phone’s apparent FaceBook integration.

Social networkers will no doubt love the fact that Facebook galleries appear to have been built into the phone itself.

It does seem that the social network is seeping into the foundations of tech after Monday night’s Apple extravaganza showed that their newest operating system for iPhone and iPad deftly knits the network in to its environment. 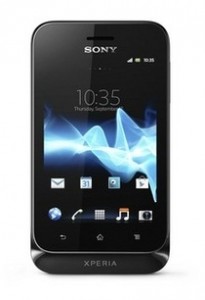 Sony makes a point of stating that the budget Xperia’s name is pronounced “tip-oh”.

The Tipo is equipped with an 800MHz Qualcomm Snapdragon chip, so it’s not going to be blisteringly fast I expect.

Apart from the smaller screen and camera the Tipo pretty much matches the Xperia Miro on the specs front.

There’s 3G and WiFi connectivity, microSD support up to 32GB, a 1500mAh battery and is available in a range of colours.

“The Xperia Tipo is for consumers who want to realise the benefits of a smartphone for the first time as they migrate from a feature phone”, said Calum MacDougall, director of Xperia marketing at Sony.

Sony has also unveiled the Sony Xperia Tipo Dual, the only difference being a dual-SIM slot, so we’re unlikely to see this variant here in the UK.

Sony was unable to give a release date for the Xperia Tipo, but assured us that it will be arriving soon. As for the Sony Xperia Miro, that is definitely headed to Europe.

Here’s a tour of the Miro: