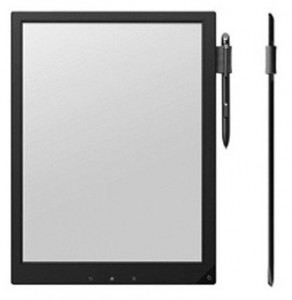 As well as officially announcing their new Sony Xperia ZR smartphone, Sony has also taken the wraps off a new 13.3-inch e-Ink slate and stylus.

Educational Institutions and offices are the two highest consumers of paper so Sony has designed this new e-Ink slate as a bid to replace paper and make dragging around reference books easier for students.

It also packs 4GB of on-board storage, with a microSD card slot for expansion.

The academic tablet is equipped with an electromagnetic induction touchscreen, which works with the provided stylus.

Because it uses e-Ink technology it’s extremely power efficient, powered by a Li-ion battery it can run for 3 weeks on a single charge.

The listed specifications are for the devices that will be field tested during late-2013 at three Japanese universities, so when the final devices is launched they may have changed a little, to keep up with progress.

Sony will showcase a prototype of this digital paper at The Fourth Education IT Solutions EXPO to be held in Tokyo from 15 to 17 May, and is planning to launch it commercially by the end of 2013.