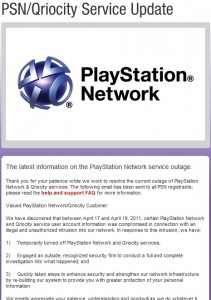 Sony is in deep do-do and has had to admit that the tech giant has lost the personal data of millions of PSN and Qriocity users – Names, email addresses, billing addresses and perhaps credit card details have all been compromised.

You may have read about or actually suffered the outage of the PlayStation Network (PSN) and its suspension on Wednesday April 19th – for some reason Sony has only just come clean to the extent of the security breach.

A spokesman said it took ‘several days of forensic investigation’ after learning of the breach before the company knew consumers’ data had been compromised including PSN users name, address, country of residence, PSN ID, PSN password, security questions, purchase history, email and birth date – all 77million registered users may have their details inadvertently shared with the hackers.

Sony announced the details of the security failure a few hours after the huge launch bash of their new tablet duo the S1 and S2 yesterday – PSN users weren’t happy (and rightly so) that the hacking announcement was seemingly overshadowed by the huge tablet release – the news that the PSN had been hacked and private data grabbed was released on a company blog and tweeted in the first instance.

In an email to all PSN users, Sony said it had suffered, “â€¦an illegal and unauthorized intrusion into our network,â€ and that the issue was being investigated by, â€œâ€¦an outside, recognized security firm.â€

Sony’s statement states, â€œIf you have provided your credit card data through PlayStation Network or Qriocity, to be on the safe side we are advising you that your credit card number (excluding security code) and expiration date may also have been obtained.â€

Sony has said that its servers were attacked between 17 and 19 April, with the company suspending PSN and Qriocity since then. It had been believed that the service was still under attack until Sonyâ€™s statement last night.

The ‘Anonymous group’ has been singled out as the attackers as it has publicly vowed vengeance for the company taking legal action against two hackers, including George Hotz.

But the group has said it had nothing to do with the intrusion. In a statement on its website, Anonymous said: “For once we didn’t do it.”

PC World’s Keir Thomas said the phrasing Sony used – talking of an ‘external intrusion’ – indicated that the attack wasn’t a Distributed Denial of Service (DDoS) attack, which is one of Anonymous’ most popular weapons. Instead, this seems to be an individual breaking into the network and this is probably why it’s taking so long to clean-up – Sony has to trace every corner of their systems affected by the hacker and repair it or restore files.’

Thereâ€™s still no word on when PSN will be back. If you think youâ€™ve been affected, you can check out Sonyâ€™s official PSN FAQ for more details.

Are you shocked that such a huge group like Sony can fall foul of an attack like this?

Have you been affected? What is your reaction?