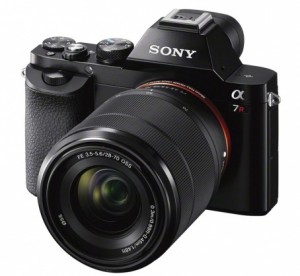 It had to become official after the recent leak and now The Sony A7R compact interchangeable lens camera has been announced.

This is the world’s first full-frame mirrorless camera and it’s packing some serious spec.

The A7R is equipped with a 36.4-megapixel full-frame 35mm Exmor CMOS sensor which can be mated with any of the six full-frame lenses which are compatible with Sony’s E-mount lens format.

The dust and moisture-resistant magnesium alloy body boasts front and back dials, a control wheel and exposure compensation dial, with an OLED viewfinder or tilting 3-inch screen for composing shots.

Inside that case you’ll find a new Bionz X processor which triples the speed of previous cameras, while Sony claims the autofocus is a third faster than conventional contrast-detection autofocus.

The A7R can capture 1,920×1,080 Full HD video and, thanks to its HDMI output, you’ll be able to watch the rushes on a monitor or TV. Audio is taken care with by the built-in stereo mic and sound level controls.

This social snapper also has NFC and Wi-Fi so it can hook-up with Sony Xperia phones, and other Android smartphones and tablets.

A Smart Remote Control apps lets you take shots with your phone which should be perfect for group shots.

You can order the A7R from Sony today, priced at £1600 (body only), and it hits shops in mid to late November.