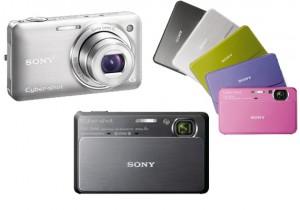 It looks like the big companies are determined to make 3D a regular part of our digital lives and Sony is sprinkling the 3D fairy-dust over its Cybershot Camera range.

I reckon, unless you have a very steady hand, using a tripod or similar whilst panning across your chosen vista will improve the effect 😉

Also first appearing on these clever cameras is Sweep Multi Angle – after taking Â a 15 frame burst a â€˜3D-styleâ€™ image can be viewed from different angles. After shooting, just tilt the Cybershot Â from side to side and sensors inside the camera detect your movements, scrolling through the sequence of multi-angle frames as you tilt and view the cameraâ€™s LCD screen. Multi-angle views can also be viewed simultaneously on an ordinary 2D television as you tilt the camera.

Aside from the above smarts these snappers can take 1,920 x 1,080 pixel HD video and sport 12.2 megapixel CMOS sensors. The WX5 has a 5x optical zoom, while the TX9 has the 4x version.

The WX5 and TX9 are joined by the T99 which lacks the 3Dness of its stable-mates but has a nifty new design and plenty of snazzy colours to chose from. It also rocks a 14.1 megapixel sensor and can shoot 720p video as well as having the Sweep Panorama function that it can use above as well as underwater 🙂

All three cameras will be available from the middle of September – prices will no doubt appear before then.

Here’s a spec table to help you chose between them 🙂