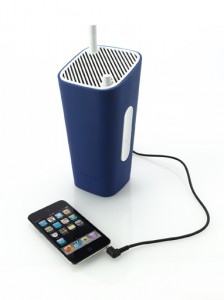 I will openly admit that I have not owned a radio outside of one in a car since 1988 – and then it was in a midi system so I didn’t really have a choice. Sure, there were radios in the offices I worked but, given a chance, I would rather pick what I listened to. So, being handed the Sonoro GoLondon DAB+ Radio to review I was prepared to be underwhelmed and have it returned within a couple of days. 1 week on, however….

Looking at the German-built Sonoro GoLondon I could tell that the humble wireless has come a long way. Granted, it looks like some kind of funky drinks receptacle but the rubber sleeve (which can be changed to suit your surroundings) made it feel nice to hold and the whole unit feels well put together.

Sturdy is good as the Go London has been designed to be a totally portable FM/DAB/DAB+ radio and thanks to a healthy rechargeable battery, it can be used indoors and outdoors and boasts a drip-proof casing. The Sonoro has followed me around the house and even in to the garden and it has played merrily away from a power outlet.

The added bonus is, if you get bored of the DJs cutting in to your favourite track then you’ll be glad to know that the Go London offers an AUX-in should you want to hook it up to your MP3 player or mobile phone and is bundled with a cable to make this even handier.

Ok, so I can be won over by design but this is a piece of audio equipment. How does the GoLondon sound?

Well, to be honest, it sounds pretty great actually. The speaker offers excellent clarity and lots of volume. I was pleasantly surprised to hear that there was good balance between bass and treble too.

I found no reason to have the GoLondon up further than half volume – and that was outside. When I had plonked the radio on the kitchen worktop I didn’t have it much past a third volume even with the extractor hood going and all the other associated ambient noise of a bloke in the kitchen.

God is in the Radio 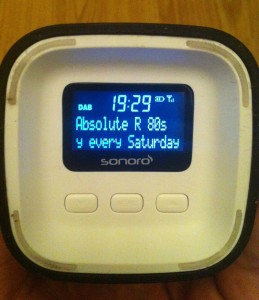 As well as the stubby volume knob, which doubles as the on/off switch, the top of the Sonoro GoLondon is where you’ll find the telescopic antenna. I didn’t really find that I needed to employ this but if your reception is proving to be a little dodgy then this will prove a welcome addition.

Around the back is a small cut-out section – this is where the FM/DAB selector lives as does the power and Aux in ports.

If, like me, you were wondering how you select the station you want to listen to then wonder no more.

After squeezing what appeared to be large white buttons on the side to no avail (these actually help keep the rubber sleeve in place) I turned the unit upside down to be greeted by an LCD screen.

Heavily recessed into the base of the GoLondon is where you’ll locate the LCD screen and three buttons – left, right and menu. These enable you to change your channel easily, while the display shows channel text, battery life, the current time and the radio signal strength.

This dims when you’re not looking for channels and so helps with battery life. 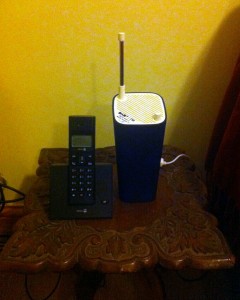 There is much to like about the Sonoro GoLondon. It looks and feels like a top quality radio, which it undoubtedly is.

I was impressed by its sound quality and the way it sipped at electricity which meant that it could be happily portable for 12 hours on a single charge. Great for camping or extra-long picnics!

I also enjoyed the fact that at no point did the signal die – even with the aerial away.

I guess that being able to change the cover is a nice touch should you be the indecisive type. There’s a selection of them available at £16 a pop in either coloured ‘soft-touch’ sleeves, or as fuzzy, textile covers. Personally, the black rubberised cover that my review device wears suits just fine.

My only sticking point with the Sonoro GoLondon is the £130 asking price. I’m not saying that it isn’t worth every penny, but there are other DAB radios out there a lot cheaper – I’m just not sure if my girlfriend can be convinced it’s worth it.

You can buy it from selected retailers across the UK, with a full list stated on the Sonoro website.