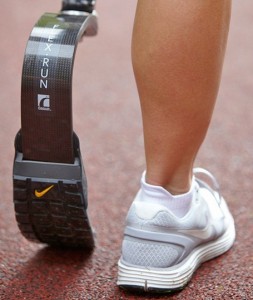 If you have a prosthetic leg or foot then you’re able to wear shoes. If, however, you’re kitted out with those speedy carbon fibre blades then slipping on a regular trainer isn’t going to work – so Nike has invented one.

The blades are used by competitive athletes, including triathlete Sarah Reinertsen who helped Nike co-develop the product.

The Sole is made-up just like any other trainer and comprises of an outsole and midsole.

The Sole uses a specially designed material called Aeroply which allows it to grip the carbon fiber of the prosthetic blade while the athlete is running.

Not only is the Sole designed to make running with a prosthetic limb more comfortable, but thanks to Nike’s expertise in this field the extra engineered grip will most certainly improve their performance on the track.