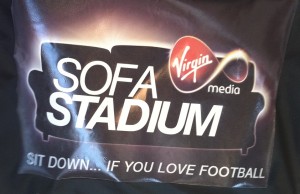 I was invited to head to a football stadium to watch the Manchester City v Liverpool match on Monday. The stadium in question was the Sofa Stadium.

Now, I’m not the biggest footie fan but even I know that there isn’t a sofa stadium (there isn’t is there?) – I’m aware of the Saddle Dome but that’s different.

This particular stadium was designed from the ground up by Virgin Media and offers football fans a forum for banter while they watch Premiership football.

I was more than happy to try out the social networking side of things but I needed a fan – someone that this particular bit of software is aimed at. Fortunately my buddy and football pundit for the night, Mr Neil Maguire, was happy to assist 🙂

Sofa Stadium is aimed at those that can’t make the match in real life but would normally spend the duration of the match at home texting their mates about anything from the cost of the latest signing to the validity of the ref’s decision.

All you need is an internet connection, a computer and a cold beer (the latter is optional) and you’re ready to enjoy the atmosphere of match day without trying to see through someone’s head, overpriced booze and dodgy pies.

Once you log into www.sofastadium.co.uk you have to pledge your allegiance to a particular side (we were guided over to the Man City end) and this means that everything we posted up could only be seen and replied to by fellow fans – as would happen on the terraces. I do think, however, being able to see what rubbish the opposition are chatting would keep the banter up. Don’t worry though. There is a swear filter and when we were testing it out there’s also a real person moderating things. Because this is still a beta there were some things that you couldn’t type: obviously Seaman (as in David) wasn’t allowed but Arsenal would only be allowed through the filter if the first letter was a capital. That is all understandable but when we tried asking “was that a Richards assist” – that was also blocked because of it including ass, or perhaps hard, or perhaps both.

You can also make your presence felt by clicking buttons that will get your little avatar in the stands booing, singing or cheering. If enough of your fellow fans feel the same way (I think it works on percentages) then the whole stand will join your crowd leader.

With Sofa Stadium you are able to vote for the best player, and the worst – you get to click on which ever player you feel is having a blinder or a shocker and also vote for the man of the match throughout the game. There’s more voting opportunities as well. If the striker sends the ball way off you can say if you thought it was worth a crack or if there’s a penalty given you can agree or disagree with the decision.

The main part of the screen is taken up by the formation and players of both teams on the pitch and the sofa stands. On the right-hand bar you have the chat window which can be clicked over to see what’s being Tweeted about the match. You are also able to opt for all your comments to be posted onto your Facebook wall to prompt more chat. Â There is, naturally, a portrait of Richard Branson hanging on the wall as well.

Cindy Rose, executive director of digital entertainment at Virgin Media said: â€œSofa Stadium is the perfect place for armchair supporters, commentators and managers alike, to get actively involved in football, and a brilliant way to bring together the multi-screen entertainment experience”.

I enjoyed it and I could actually see the benefits if you were wanting to learn about the game without being shown-up by saying something out of place at a real game. Neil said that he’d use it if he knew that his mates were logging on but did point out that not everyone has a puter in the living room or a laptop.

We both agreed that if an iOS and Android app was built it may appeal to a wider audience who perhaps can’t even get to a telly but want to keep up with what’s happening with their team.

I’d like to think that this will be a success – what do you think?

Give it a go here.

Have a glance at the demo vid below: