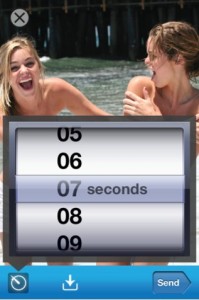 If you’re in the public eye but also like to share the occassional intimate picture with someone via your smartphone, I’m looking at you Heather Morris from Glee as you’re the latest to be caught out, then Snapchat for iPhone may be the app for you.

Ok, so Snapchat isn’t actually advertising itself as the sexter’s weapon of choice for sharing saucy snaps but it does offer the exhibitionist a way of flashing their tackle without the fear of it landing on a website 😉

Snapchat isn’t just for the Paris Hiltons, Kanye Wests or Hayley Williams-types out there (I found these when researching this article) – regular folk sometimes get that naughty thrill buzz from sharing a risqué pic with their partner when distance seperates them. The thing is, depending on how well you know the recipient, sometimes that frisson of excitement is followed by gut-wrenching panic and thoughts of – what happens if (s)he decides to share that last snap with their buddies? What happens if that pic ends up on the (apparently) highly addictive Facebook?

Well, this new iPhone app aims to minimise the potential for that reputation-ruining (hey, it’s been cold out recently!) moment of stupidity where it wasn’t your head doing the thinking. This is done simply by reducing the ability for the recipient to keep the picture on his or her phone.

Real-time picture sharing app Snapchat for iPhone allows the sexy sharing to continue without the risk mentioned earlier as it lets the sender control how long the picture is able to be displayed after it’s opened.

Once that time-limit expires, the picture will disappear for ever.

If that sneaky recipient tries to take a screengrab of the picture the sender is instantly notified and then… well, I guess that’s when you can panic and at least shout at them a bit.

Snapchat says that it can help you “build relationships” and that it “is instantly fun and insanely playful,” – check out the screenshots featured on the iTunes app page and make your own mind up 😉

If you have an Android, BlackBerry, Windows Phone or even iOS device then TigerText may also be up your ally.