SmartBot converts your mobile in to a robot buddy [video] 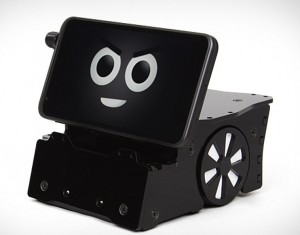 Who doesn’t want a robot of their own? Chances are you own a smartphone. You’re already halfway to having your own SmartBot.

SmartBot is the cheeky-looking character you can see here and comes from robotics bods, Overdrive.

This little Bot might appear basic, because it kind of is. SmartBot utilises your smartphone’s hardware and software to perform functions.

It’s just a cart with 2 motorised wheels with an onboard MPU, two front LED lights, a speaker/buzzer, and an expansion port for firmware updates or the addition of an Arduino board.

It will play nice with a smartphone whether it runs iOS, Android or Windows and connects via the mobile’s headphone jack or NFC.

SmartBot can process data, see, hear, navigate, orient itself, take pictures, understand speech and talk back to you, among other things depending upon the hardware of the smartphone and the app being used.

There are already many custom apps for it and many under work.

The Smartbot can even be customised with extra accessories include a gripping hand, servo motor, cargo bed, LEGO bricks adapter, pen adapter (so the robot can draw on the surface it’s moving over), and a ball-shooting gun.

Check out the SmartBot in the video below.