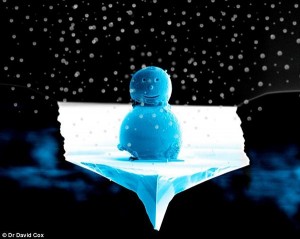 Whilst regular folks are outside trying to out-do each other with huge snowmen and other snow-sculptures it takes real geeks to turn the whole thing on its head.

The geeks in question are actually engineers at the National Physical Laboratory.

They have built the worldâ€™s smallest snowman – ok, it’s not actually made out of snow but it is tiny.

It was made by David Cox out of two tiny beads that have been welded together with platinum.

The tiny snowman measures 0.01mm thick, which is about one fifth the width of a human hair, and it was made by manipulating nanotech particles – as you do.

It’s brilliant – it even has eyes, a nose and a smile which were carved from a focused ion beam, and a tiny piece of platinum was used for the snowmanâ€™s nose.