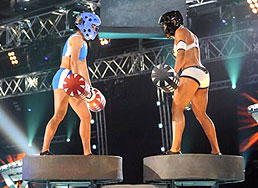 SkyÂ is pushing their eagerly anticipated 3D TV service to be hitting a telebox near you by Christmas!

That’s what chief engineer, Chris Johns is hoping after recent trials of the 3D broadcasting service.

â€œOur aim is to refine 3D techniques and TV production and build a content library over the coming year,â€ Johns told the Digital TV Groupâ€™s annual conference. Although Sky has already proved that it is capable of transmitting 3D content, generating enough of it to be more than a short-lived gimmick is going to be the tricky part, as it involves special recording techniques and film sets.

The good news is that the service can be run using an ordinary Sky + HD set-top box.

So, by the end of the year we can be watching Gladiators 3D.

When I get a fixed date I’ll be sure to let you know!