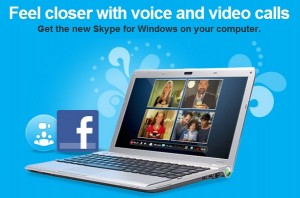 It has finally happened.

After months of beta testing Skype 5 for Windows has landed and it has the promised Facebook integration.

This partnership is a win-win for both companies: Facebook gets access to a well known and tested voice and video calling platform, and Skype will see a chunk of Facebookâ€™s 500 million users sign up.

The Facebook grooviness in Skype 5 means that you can import contacts direct from your Facebook Phonebook and then call them at the touch of a button.

For those of you that find it difficult to draw yourselves away from the News Feed – this is also imported so that you can see what people are having for dinner, who has suddenly become single or who has just bought shares in SUBSET without having to leave Skype!

You will be able to request your Facebook friends’ numbers with one click and opt to have your Mood Message and Facebook status become as one. The latter is actually useful in a way. Before you call your buddy you’ll be able to check to see what they’re up to – if their status/mood says “in recording session” you can pretty much guarantee that they’ll not pick up.

In Skype 5 everyone’s profile pictures are made public which will help when looking for your good friend John Smith and Jane Doe.

Group video calling is the bonus as far as I’m concerned as various parts of my family seem to be moving to Canada. When this makes it out of beta the group vid will become the virtual family get-together. It will also be handy for meetings and collaborative projects across countries and continents. This new face-to-face service will allow up to 10 people to be in on a single call at once. I’m particularly digging the Dynamic Mode which reacts to sound – this makes whoever is talking appear bigger on the screen.

If youâ€™re planning a 10-way vid chat then Skype recommends an internet connection of 1024 kbits per second, and a computer with a Core 2 Duo or Intel i7. It supports up to 640×480 VGA up to 30 frames per second.

So, before you ask, no HD here folks!

Although there’s no exact dating, Skype plans to update its Mac client by the end of the year with group video calling, and I assume that it would roll out Facebook integration at the same time.

I reckon that the next step is going to be Google TV as Skype already offers TV-based video calling on Samsung and Panasonic TVs.