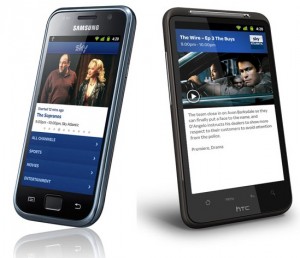 The Sky Go app is now officially on the shelves of the Android Market two days before planned.

The Sky streaming service has landed a couple days earlier than its reported launch date of February 22 – and they say good things come to those that wait!

This means if you own one of “the most popular handsets” (that includes the HTC Desire S, HTC Sensation and Samsung Galaxy S II) you can get your telly fix wherever you are.

You get access to live TV from Sky on your Android smartphones wherever you are in the UK or Ireland with a 3G or Wi-Fi connection. Watch up to 22 live channels in line with your subscription and this service comes at no extra cost to your current subs 🙂

In addition to launching the Sky Go app on Android, the broadcast giant also announced that it will be streaming Sky 1, Sky Arts 1 and Sky Living on the Sky Go service, in addition to its F1 Race Control app which is due to be released in March.

The new service will currently only work on Android 2.2 and 2.3 handsets. While Sky insists that this currently represents 85% of the market, it does throw a spanner in the works for you that like to stay bang up-to-date with stuff – that’s why you read GadgetyNews, right?

“We are working hard to ensure we can support further Android devices, as well as the latest Ice Cream Sandwich operating system (V4.0) but there are a number of technical considerations,” says the company.

That’s a bit of a shame for a new service really isn’t it?

If you are a Sky subscriber and own an Android blower (that’s not been given ICS yet) then bounce over to the Android Market now and grab the app!