Skies of Glory Creates Ariel Battle Between Android and iPhone 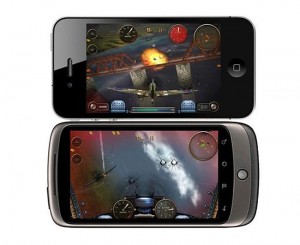 Challenging your buddies to a gaming battle usually means that they have to use the same kind of machine, or at least operating system.

This is more of an issue if we’re talking about a mobile phone game.

The game’s developer, SGN, has announced the release of the first game to allow play between two different handsets which allows iPhone and Android users to compete live against one another over EDGE, 3G and Wifi.

Togetherness is such a beautiful thing isn’t it? Especially when it involves shooting your best mate out of the skies! 😉

The iPhone owners in the house will probably already know the “Skies of Glory” title as it appeared in the app store back in December. It has now been released for Android-based blowers that are rocking 2.0 and above – including the EVO, Nexus and Droid phones.