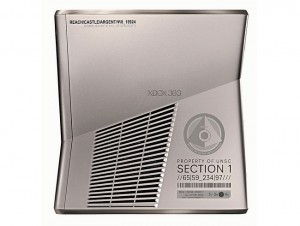 Your eyes are not deceiving you – this Xbox 360 has shunned the glossy black and opted for a sexy matte silver suit.

The guts of the console remain the same as the standard Wi-Fi rocking 250GB models but does come along with matching wireless game pads and a copy of the top class shooter game.

Microsoft will be shipping the Xbox 360 Halo : Reach Limited Edition on September 14th for $399 and Microsoft says once the supply has been sold no more would be produced to meet demand.

In other words – grab em asap!!

According to UK retailer Gamestation the bundle will cost Â£249.99 and comes with a copy of the game, a Halo: Reach themed headset, two Xbox 360 controllers with special Reach artwork as well as the special silver Slim console.

The console itself will come with special â€œcustom sound effects from the Halo universe.â€

Additional content includes a token for the exclusive limited edition Elite Armour set for the game, a copy of Halo Legends episode The Package and also waypoint Avatar gear.