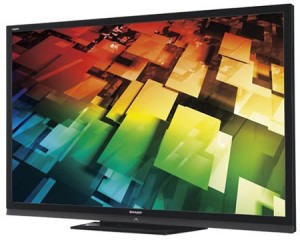 Need a larger telly? How does a 70″ Sharp AQUOUS Quattron LED LCD TV sound to you?

Sharp has just taken the wrappers of their new LC-70LE732U which just so happens to be the largest LCD television available today.

With all that space, Sharp have shoved in Wifi for access to on-demand movies through Netflix, VUDU, CinemaNow and being hooked-up to the interwebs also allows you to surf apps like Facebook, Pandora, Twitter and Flicker.

The LC-70LE732U is equipped with four HDMI inputs for your PlayStation 3, Xbox 360 and perhaps HD Wii 2 consoles or anything else you reckon would benefit from a humungeous viewing area.

You’ll be pleased to know that the new Sharp also has an ENERGY STAR qualification which means easy power consumption.

The LC-70LE732U is available now at major electronics retailers nationwide with an MSRP of $3,799.99 – you expected that really didn’t you?