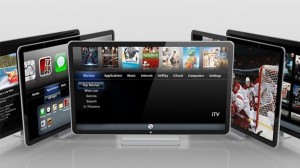 Things are certainly heating up in the Apple Television factory. The latest is that Sharp has had to ask for help in order to fulfill orders for the displays for the fruity HD telly.

The latest word on the gadgety-grapevine is proof positive that there’s definitely something going on between Apple and known screen-supplier Sharp.

Sharp has recently gone in to overdrive producing displays reportedly destined for Apple’s next-gen gogglebox. The thing is that the numbers needed are so huge that Sharp has had to rope in LED supplier Genesis to help.

Word is that the Apple iTV is being tested in Canada already.

The news that British broadcasters, ITV, sent a no-holds barred letter to Apple apparently all happened last year and, quite frankly, I don’t think Apple would chance annoying them.

The Apple HD TV will land in 40 and 50-inch flavours and will be equipped with Siri style voice controls. So, be careful what you shout at the iTV as you might confuse it 😉

Apple has already got a few tasty bits of hardware ready to announce – the iPad 3 should be coming March 7th and the iPhone 5 is expected to be outed on June 10th.

That means it’s more-than-likely going to be September before you can get your mits on an Apple television.