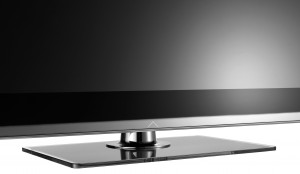 I was 31 floors up in Centre Point on Tuesday to witness Sharp’s new line of televisions which, for the first time in tele history, is rocking a fourth, yellow, sub pixel joining its red, green, and blue buddies.

Sharp is waiting before joining the possible ‘fad’ of 3D and is instead looking to make large screen TV’s more economical (40% less power used compared with other LCD’s), brighter, ‘sharp’er and with a larger pallet.

Sharp actually played around with introducing white and cyan pixels but the yellow pixels had the best match of transparency and usefulness as yellow helps with greens, yellows (duh!) as well as the lighter blues.

As Neuroscientist, Dr Jack Lewis, says: â€œa key mechanism of perceiving colour involves comparing levels of red versus green light and blue versus yellow light, which all happens in a special layer of neurons within the retina. The addition of the yellow sub-pixel (to the standard red, green and blue) in this product creates so many new colour tones that the new technology Sharp is using to create images is mimicking critical features of the brain’s visual system. This could ultimately make us feel more involved in things we watch on TV, whether itâ€™s playing a video game with your mates, cheering on your team or watching the latest action thrillerâ€.

Be prepared to see the little yellow pixies …. errr.. pixels in new Sony goggle-boxes too as apparently they’ve invested heavily with Sharp for the research that’s delivered this extra shade.

Each model is 1080p HD ready, will come complete with Sharp’s UltraBrilliant Edge-lit panel technology and will have HD Freeview baked in as standard.

You also get timeshift so you don’t miss ‘enders as you make a cuppa or if you wanna skip the adverts in 24. This uses the 8GB internal flash memory which is good for about 25 minutes of HD or a coupla hours in standard viewing.

You’ll be able to shove a USB device into the back of the tele but this will only bring the joys of vibrant pictures and sounds until the firmware update which will allow DivX flicks. This should hit the sets in August.

Pricing will start around Â£1400 for the 40″ which should be out at the end of April.