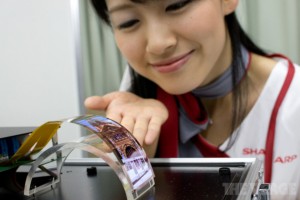 You may already have felt the excitement caused by the possibility that the Apple iPhone 5 may come rocking a 440ppi OLED screen courtesy of LG – but Sharp have just announced their 498ppi TFT LCD mobile display and it looks stunning!

Sharp and research company Semiconductor Energy Laboratory have just announced an advancement in thin-film transistor (TFT) technology called CAAC-IGZO (C-axis aligned crystal Indium gallium zinc oxide just in case you were wondering), which they believe will do nothing short of “revolutionize” display technology.

As it is with a lot of advancements, the new crystalline structure was discovered by accident and proved to have much better electrical properties, allowing Sharp to make even smaller transistors, decrease power consumption, increase touchscreen performance, and produce even higher resolution displays.

Sharp believes the advance is particularly important in the mobile industry, where manufacturers are constantly pushing for higher pixel density.

The two companies proudly showed off their new 6.1-inch LCD display with a remarkable 2560×1600 resolution. At 498 ppi, the prototype offers even more pixels per inch than LG’s 5-inch 1080p display from earlier this week.

The company says the new technology has other benefits as well, including much lower background noise when used in touchscreens, and the ability to produce much narrower bezels.

So – how about one of those beauties in your new smartphone then?