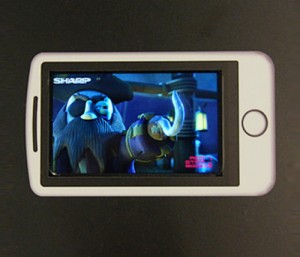 It does look like 3D is getting a huge push.

The latest films have all been in 3D, 3D TV’s are now available and even Google StreetView has a 3D option – you’ve seen the little fella with the glasses right? Have a look at this article and spot him on the right-hand side of the map. Just roll you mouse pointer over him 😉

Now it looks like 3D will be coming to pocket-sized gadgety things in the next 12 months after Sharp unveiled the company’s new technology at an event in Tokyo.

The panel manufacturer demonstrated a glassesless 3D solution on a 3.4 inch device with live images of a model thrusting her hands out towards the viewer.

We’ve seen 3D equipped mobile phones already but this screen uses a parallax barrier method of 3D stereoscopy. This is the same eye-trickery that’s used in the glassesless TV prototypes doing the rounds at the trade shows.

Apparently this was all very impressive and Sharp intends to see this tech to other gadgety makers – Hmmmm…. Nintendo 3DS anyone? 😉

The display has already been described as “mind blowing” and should be useful not just for games but for any mobile task that requires 3D. It can work either vertically or in landscape and can adapt to a live video feed, opening the door to both still and moving cameras that can both capture 3D and display a 3D preview of the final shot.

If you start getting a bit bored of it or it’s giving you a migraine you can switch the display back into retro-tastic 2D.