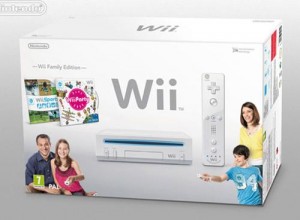 Christmas is fast approaching and Nintendo are getting ready. They’ve introduced a new look Wii at a bargain basement price!

With the Wii U waiting in the wings Nintendo have reconfigured their social gaming favourite with a new horizontal vibe – but best of all is the cost.

The new Wii hardware and Mario Kart bundle helped more Wii’s fly off the shelves in May but Ninte wants to see if they can do the same at the end of the year.

The new bundle includes the classic Wii Sports as well as Wii Party but also comes complete with a Wii Remote Plus controller and Nunchuck.

Blatently aimed at getting families active after stuffing themselves with too much festive fare the pocket friendly RRP of £79.99 should see these gaming consoles featuring heavily amongst homes in December methinks.

The Wii bundle launches across Europe in October.