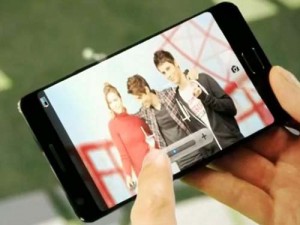 Has Samsung been careless? Did they think that we would not spot it? They only went and flaunted their new flagship phone the Galaxy S III on video!

The Samsung Galaxy II is a firm favourite amongst the Android crowd but the company thought they’d be clever and slip it right in their very own CES 2012 highlights video.

Looking at the video the Galaxy S III will be a bit iPhone-esque in its form-factor and the screen will take up as much as it possibly can with its edge-to-edge display.

The Galaxy S III also appears to be following the Galaxy Note in the bigger is better crew – unless the person holding the phone in the video has tiny hands.

The non-standard battery level display is pretty curious but then it’s all synced to the Sammy snapper at the time. So, it could be showing the camera’s levels, etc. Maybe?

The Galaxy S III promises to be powered by a potent quad-core processor and be loaded with a 12MP camera, a 4.6-inch HD display, 1080p video capture and 2GB of RAM.

Word is that we’ll find out in a few weeks.

Have a look for yourself – just spool along to around 7 minutes where Samsung is showing off its Viewfinder app: