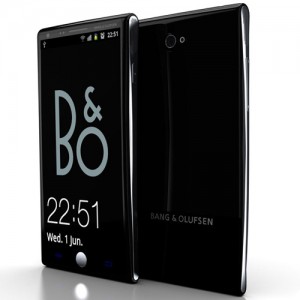 If the HTC Sensation XE, with its Beats Audio technology, wouldn’t really sit right with your refined audiophile gear then perhaps a phone from those Danish sonic maestros over at Bang & Olufsen might be more up your gravelled driveway.

Samsung have imagined a smartphone which not only would presumably pack in some B&O audio magic but exudes that recognisably stylish B&O design.

This is not the first time that Samsung have dabbled with Bang and Olufsen kit either. Back in 2009 the Samsung m7600 smartphone was cobbled together with a B&O amp and Helio styling.

Going a step further than the Lumigon T1 phone which is fitted with B&O smarts the Samsung B&O brings together the no-nonsense grace of the Danish audio-visual giants with the supermodel sveltness of the Samsung Galaxy S II.

When it is slipped into the gorgeous dock it then resembles one of Bang & Olufsen’s classic telephones.

I reckon that this could be a winner if you could also use the phone as a remote for your other B&O goodies.

Should it move past the render stage? What do you think?