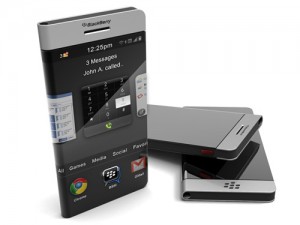 Set BlackBerry sensors to lust! This curvy BB would even attract the most ardent iPhone fan surely?

Following the sexiness of the Porsche Design P’9981 this latest creation has definitely got my juices flowing.

The BlackBerry concept by John Anastasiadis takes the on-board the Porsche Design elements along with those of the BlackBerry London idea and then gives it a loving yet logical twist.

The mobile isn’t just a pretty face either – it has some clever tricks up its sleeves too. You may have notice the lack of cameras.

It’s not that John forgot about them, rather the front and back cameras are tucked under the screens which become transparent above the lenses when they’re needed. Very cool!

You will, however, be able to snaffle some new RIM kit later this year when the BB blowers will be sporting the new BBX OS.

It’s also been suggested that Apple scrapped the iPhone 5 release last year because curving Gorilla Glass was too costly. Still, we can’t wait for mobile phone designers to start exploiting the full potential of curved glass.