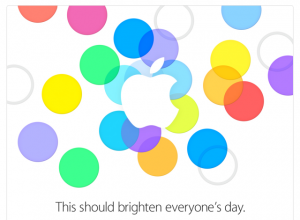 Apple has gone all official and is ready to unveil its next-generation iPhone hardware on September 10th.

After weeks of guessing, speculation and rumour, the fruity phone and computer cobbler has just mailed out invitations to an event in Cupertino at Apple’s campus on September 10th starting at 10AM PT.

What can we expect? Well, after months of ‘leaks’ and rumors it looks like we could be getting two new iPhones this year: an iPhone 5S and iPhone 5C.

If the leaks and rumors are accurate, then the iPhone 5S should get a fingerprint sensor for device security, and a 12ish-megapixel camera with dual-LED flash. The new flagship iPhone will probably retain a similar design to the existing iPhone 5.

What most people are intersted to see unveiled though is the all new iPhone 5C device.

By all accounts this will be plastic-bodied low-cost option which will be available in multiple colours – the C for colour (and not cheap) could well be the reason for the dotty invite.

It’s usual for any new iPads to be launched at their own separate event, similar to how Apple introduced the iPad mini last year.

iPhone hardware aside, Apple is gearing up to unleash its major UI overhaul to the iOS operating system.

iOS 7 has been in beta for months, but it’s likely that Apple will have some surprise additions on the software side that take advantage of the new iPhone hardware. Those already with iPhones will want to know when iOS 7 will be available as an update and which features will be available to existing iPhones – and if they can trade them in at Apple stores.

What are your predictions? I’m guessing we won’t see the iWatch.