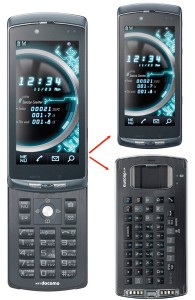 I tend to get quite blasÃ© these days when I read about another new Japanese mobile phone.

Let’s face it though – until you read the spec-sheet they all look the same – generally clamshell phones.

This is why the Fujitsuâ€™s F-04B is noteworthy. It’s the first to feature a two-module body.

That’s right my gadgety friends. The ‘Separate Keitai’ (Keitai means handset in Japanese) has the ability to split into 2 parts which can be used independently (a keyboard section and a display slate).

Whilst the section has a full numeric/QWERTY keyboard with a geomagnetic as well as an acceleration sensor.

The two bits are joined by a magnet and connected via Bluetooth.

Fujitsu says that this cleverness is designed as to allow users to send or receive mails while talking on the phone.

During video calls, users can keep the keyboard section to their ear while holding the display slate at a distance – neat huh?

When horizontally attached, the touchscreen will switch to character entry mode or display a â€œvirtualâ€ game pad so that users can write emails or play games – yup, the keyboard can be used as a game controller, too.

I love this bit. I know that there’s those of you that have to stand in a certain area of your home to get a decent signal – well with the Seperate Keitai you can leave the display section in the bit that gets a good signal and, as long as you’re no further than 10m away, talk via the keyboard part from the comfort of your sofa.

Fujitsu says that you should get around 2,000 hours of standby and 500 minutes of continuous talk! That’s three-times as much as the Japanese are currently used to from their hi-tech mobiles.

There’s already Bluetooth accessories being dreamed up for the device – for example a mini projector that could be remote-controlled with the keyboard section.

The Seperate Keitai will appear in NTT Docomoâ€™s winter line-up and appear on shop shelves in Japan around March/April time.

The best bit – it’ll only cost Â£380! That’s for two phones really when you think about it 🙂