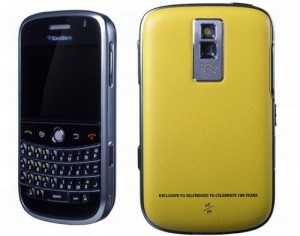 Selfridges is celebrating its 100th birthdayÂ in a fine gadgety way!

Selfridges loves the gadgety world and was there at the scene of the first public demonstration of John Logie Baird’s television in 1925, and has gone on to host many other world firsts.

To mark its 100th SelfridgesÂ has commissioned a bunch of folk including fashion designers to tech luminaries to go and slap on Pantone 109 (Selfridges Yellow) onto some of their gear.

Oh Canada’s BlackBerry has got an invite and has come upÂ with this limited edition BlackBerry Bold.

The leather back-plate has been done over in the luxury department store’s trademark yellow, and the number keys have seen a redesign also.

Just 10 of theseÂ  have been touched by yellowÂ and must be a must-have for any diehard Selfridges fan – Harrods? Pah!

As well as the limited edition it also carries a rather exclusive price tag ofÂ Â£1,000 – but you also get VIP support.

In addition to a yellow BlackBerry, Selfridges has also commissioned fashion designers Jimmy Choo, Paul Smith, Mulberry, Marc Jacobs and more, plus Fender for a limited edition guitar and Toywatch for a yellow plastic watch.