Segway Owner Dies After Driving one Off a Cliff 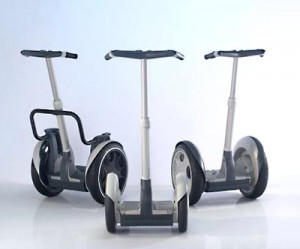 Jimi Heselden who owns the Segway company has been found dead, apparently having driven one of the two-wheeled vehicles off a cliff on his North Yorkshire estate.

The multi-millionaire businessman, 62, fell into the River Wharfe while inspecting the grounds of his North Yorkshire estate on the ‘off-road’ version of the Segway.

Jimi Heselden was the owner of Hesco Bastion the UK-based company which purchased the Segway brand from its original inventors, Segway Inc.

A spokeperson for West Yorkshire Police said, â€œPolice were called at 11.40am yesterday to reports of a man in the River Wharfe, apparently having fallen from the cliffs above. A Segway-style vehicle was recovered. He was pronounced dead at the scene.â€

In July, another Yorkshireman, Phillip Coates, from Barnsley, South Yorkshire, became the first ever person to be prosecuted for driving the motorised scooter on the pavement in the UK.