Sega Wee to take on Nintendo Wii in the Smallest Room 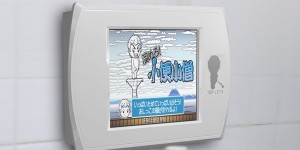 You may be pleased to hear that Sega are firmly back in the gaming industry – especially with the return of Sonic the Hedgehog on the Nintendo Wii.

Now you can control Sega hardware using your personal software thanks to its innovative Toylets system.

Using embedded sensors in the urinals you are judged on the speed and accuracy of your ‘flow’. Yeah, we need to be judged more when we go to the gents, right?

There’s four games out at the moment including one where the intensity of your delivery blows a girl’s skirt up and another that offers a multiplayer competition. Don’t worry about the latter as this thankfully doesn’t involve crossing streams with the guy next to you but matches you against the previous ‘gamer’ to have used the porcelain bowl – yup, a techno-pi$$ing competition!

I’m guessing we’re not going to get this gaming system over here any time soon but let’s face it – if there’s a way to get drunken men to aim better it has to be worthwhile!