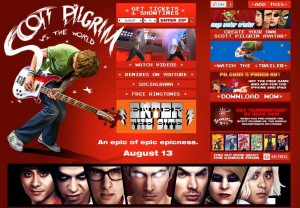 The Scott Pilgrim comic books have suddenly become very trendy recently thanks to the upcoming film – which is fine. It deserves the recognition – and the fact that the main character is a bassist that’s even better 😉

I’ve just noticed that the official site for the flick has a few gadgety bits that you might want to know about.

Rather than just show you footage from Edgar Wrightâ€™s cool looking adaptation of Scott Pilgrim vs The World there’s a neat iTrailer – think of it as an interactive DVD extras thing mixed in with an information collection game.

At the end of the clip your score is even totted up to show how many hidden extras youâ€™ve uncovered and if you’ve scored enough to get Xbox 360-style achievements.

If a song featured in the Scott Pilgrim interactive trailer takes your fancy you’ll find the track details are shown in the bottom of the window.

I’m really digging the style of this film with its classic Batman-meets-Street Fighter-esque fight scenes and the whole 90’s gaming feel of the iTrailer is spot on!

Scott Pilgrimâ€™s band name also has a gaming reference. His band, Sex Bob-Omb, is a tribute to the Super Mario Bros baddie Bob-omb – you know, the little wind-up walking bomb?

If you like Sex Bob-Omb’s material you have Beck to thank as he wrote everything the band plays! The movie’s soundtrack album features four songs from Sex Bob-Omb, with Beck providing the instrumentation and actors from the movie doing the vocals.

The soundtrack will also feature unreleased jams from Beck himself, Metric, and Broken Social Scene, credited to the fictional band Crash and the Boys. There’s also classic material from T. Rex and the Rolling Stones.

It would be wrong not to have the 1997 track “Scott Pilgrim” by the Canadian band Plumtree, which inspired comic creator Bryan Lee O’Malley to name his creation in the first place wouldn’t it? Thankfully it’s there 🙂

Scott Pilgrim vs The World is out on August 25.

Have a play with the iTrailer below 🙂