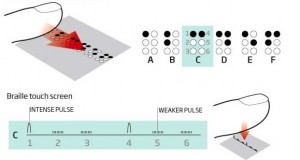 Researches in Finland have been working with a Nokia 770 Internet Tablet that will create an intense pulse of vibration that may work as braille.

The clever Finnish folk have developed a method for piezoelectric touchscreen devices that uses a single pulse to convey a raised dot, and a longer vibration made up of several weaker pulses to represent a missing dot.

In this way they are able to spell out letters that can be easily read by touch.

It did take a while for the volunteers to get the hang of it but once they had it down they were able to read a character in as little as 1.25 seconds.

Now that letters seem to be sorted the team is moving on to words and sentences.

All of this is with the aim to developing text-to-braille software sometime in the future.

This was reported in the New Scientist.