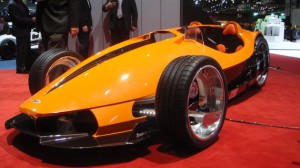 The Sbarra Orbital Hybrid is one of the many reasons I want at least one of my bands to make serious money!

Unveiled at the Geneva International Motor Show and has been dropping jaws by the sounds of things.

One reason, or, rather four reasons, is/are the orbital wheels, aka rim riders, which are totally finky hubless numbers!

Each of the front wheels is driven by a small electric motor delivering a 15bhp supplement of power to the primary internal combustion engine at the rear.

The slim and thin Orbital Hybrid is packed with new tech.

how about the laser-projected head-up display (HUD) courtesy of Delphi? 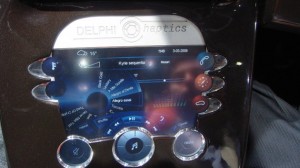 Its interface consists of a large, touch-sensitive display, which gives the driver haptic feedback when an icon is pressed. It allows control and playback of the radio, your Bluetooth mobile phone, and MP3 files via a click wheel-style interface.

Delphi says that both the HUD and Haptics systems are likely to end up in production cars sometime in the near future.

Unfortunately The Sbarra Orbital Hybrid is a concept and as such unlikely to go into mass production – but if you have the cash the car’s inventor will gladly build you a custom one-off.