Santa drops Google in favour of Microsoft for Maps 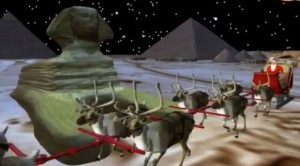 It’s that time of year again and the NORAD Santa Tracker will soon be live.

For the past few years the online and app-supported Santa Tracker has helped us all follow Father Christmas as he speeds his way across the globe delivering presents on Christmas Eve to all the good boys and girls.

This year though, Santa has swapped over from his usual mapping partner, Google, to Bing Maps.

In addition, new apps have been launched for Windows Phone, Android and iPhone/iPod touch, so that kids of all ages can keep tabs on the beardy gift-giver even when they can’t access a computer.

Microsoft’s partnership with the North American Aerospace Defense Command (NORAD), means that the Santa Tracker tool is being hosted on Windows Azure for the first time, providing geospatial imagery through Bing Maps.

Over 25 million hits are expected on Christmas Eve alone. You will also be able to track Santa in 3D through Cesium, the WebGL Virtual Globe and Map Engine.

Obviously, there’s nothing really to track yet – Chances are that Santa is busy overlooking the elves hard at work in their hi-tech production plant. You can keep up-to-date with what’s happening on Twitter though, in the meantime.

Go check out the NORAD Santa Tracker website for the countdown 🙂