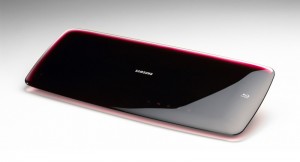 If you cast your mind back to January you will remember that I was quite taken with the sexy Samsung Blu-ray disc spinner.

Now I can make my dreams reality as Samsung has just announced the UK pricing for two new Blu-ray players, one being the top-of-the-range BD-P4600 and the other is the BD-P1600.

The BD-P4600 has touch sensitive controls, is 1.5-inches thick and offers Wi-Fi connectivity via the included 802.11b/g/n Wi-Fi dongle, so can be used to stream media to from a PC and holds the kudos of being the slimmest Blu-ray player.

You get full HD 1080p Blu-ray playback with DVD upscaling, total HD soundtrack support as well as CD playback and JPEG support on both of Sammi’s new models.

Lovely Blu-ray players seem to be dropping in price don’t they?