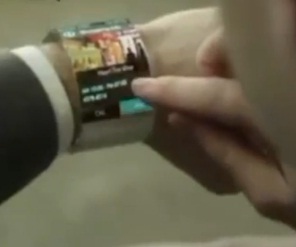 Samsung might not be working on a hoverboard or personal jetpacks but what they are developing is transparent and flexible AMOLED screens. To prove it, they’ve even released a video about their real-life uses.

Samsung has been showing off its flexible AMOLED screens at a few trade shows and they aer really impressive.

Now Sammy has unveiled a video with ideas for how the bendy screens will be used in wrap around smartwatches and tablets that roll out, scroll-like, from pens.

Samsung reckons that their tech could be seen on everything from car windows to fridges.

So, this could actually happen – but Samsung can’t, or won’t, say when.

Check below for a glimpse in to the flexi-screened future.