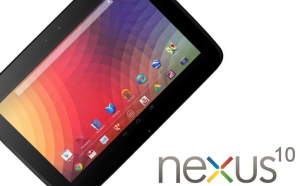 Google’s new Nexus 7 tablet is now official so what happens now? How’s about rumors that a new Nexus 10 tablet will be following soon?

According to WSJ reporter, Amir Efati, Google’s Sundar Pichai told him that Samsung and Google are working on a new Nexus 10 tablet.

The tweet fails to mention any details regarding spec, size or even hints about release of the new Nexus 10 tablet. Here’s the tweet from Amir Efrati:

It is possible that Google could use the new Nexus 10 tablet to launch the next major version of their mobile OS, Android 5.0 Key Lime Pie, which is rumored to launch in the Autumn. That could then mean we may see the device some time in October.